Obviously, there are many ways the new-for-2017 Patek Philippe Calatrava 5180/1R could be described. The most convenient way would be an extensive use of fawning superlatives – it is, after all, a full-gold, skeletonized Patek Philippe. I look at it and think not that, but more that it is a preposterous dinosaur of a watch, a T-Rex rocking Mr. T's gold chains.

I mean, who is this watch for? Is it for old people? Maybe some cigar-smoking, retired baddie in Florida, perhaps. That's a pinhead of a target group, hardly deserving of so much effort put into a watch, so who else? Younger people? Don't see rappers or footballers rocking this. It's too thin and filigree to look good on Instagram or in poorly lit VIP areas. Is it for the Wall Street banker? Well, if you are buying it with freshly laundered Russian natural gas money, this sure helps make a statement – no offense to the remaining decent people of de Waalstraat. 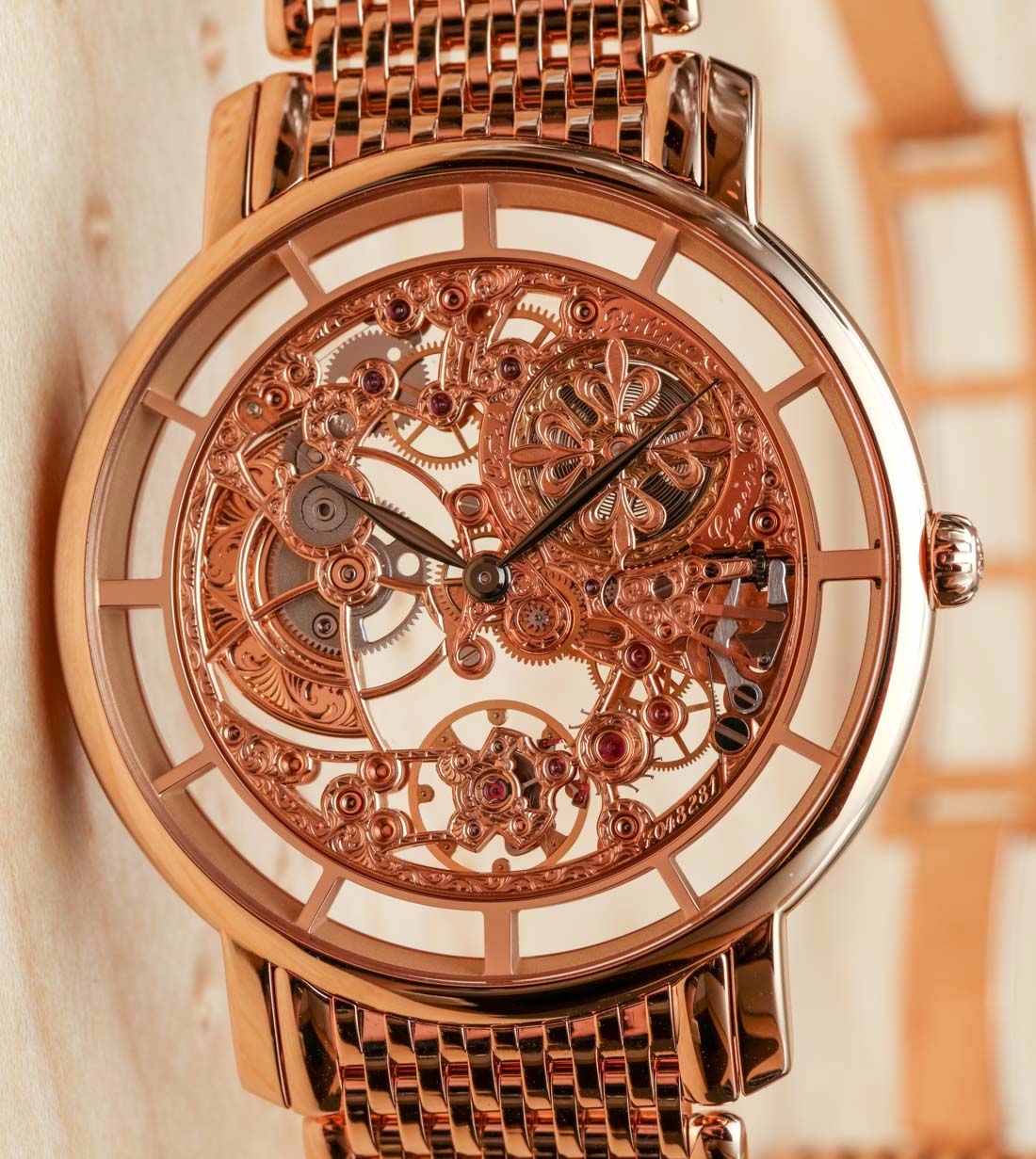 In all seriousness though, what about us, watch enthusiasts? For us, this is a museum piece – it works a lot like that aforementioned dinosaur. I think, the Patek Philippe Calatrava 5180/1R should be on display in museums around the world, where it could be admired as a fascinating thing of the past, something that so loudly and proudly basks in its irrelevance and oddity today. In a way, it is the king of its kind that would, were it in its natural habitat, command respect and humility. 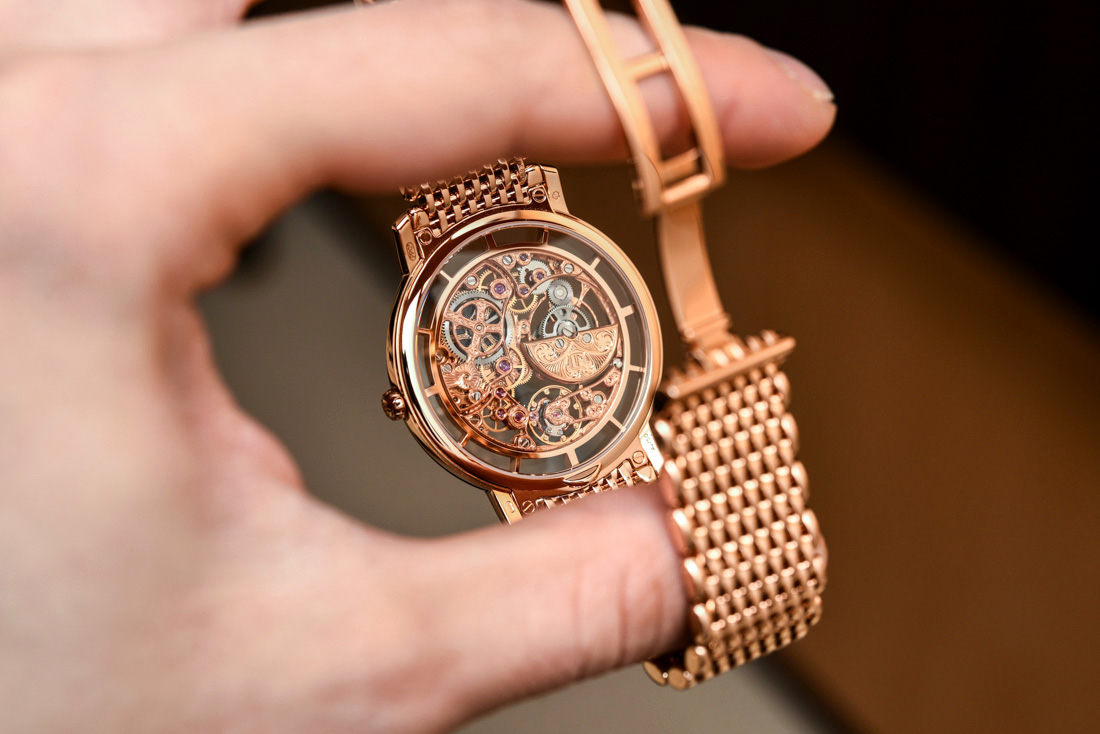 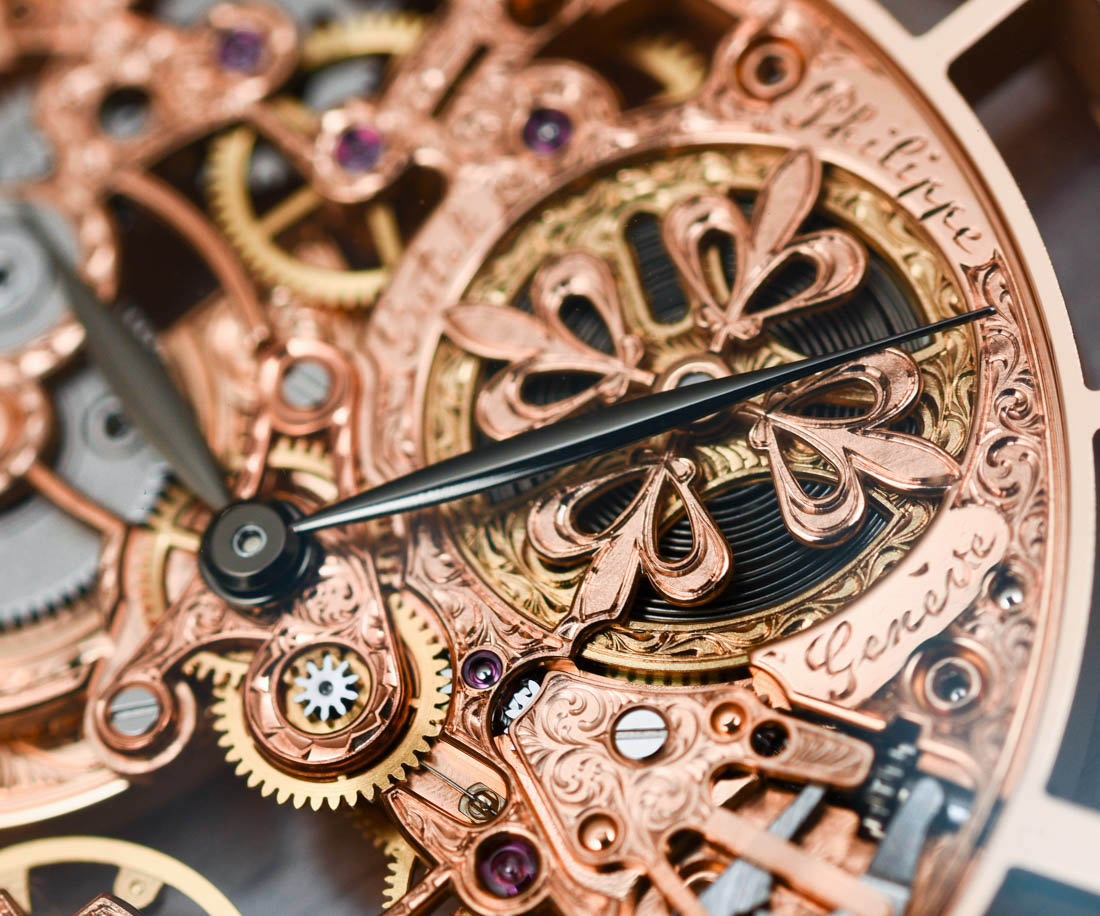 Today, though? Dressed in all the things it had put on as it advanced through its own dead-end avenue of evolution, it looks as preposterous and ridiculous, as it is awe-inspiring and fascinating. I am glad I had the memorable opportunity of seeing it live and I'll forever look forward to seeing another in the real world; although deep down I know that will never happen. 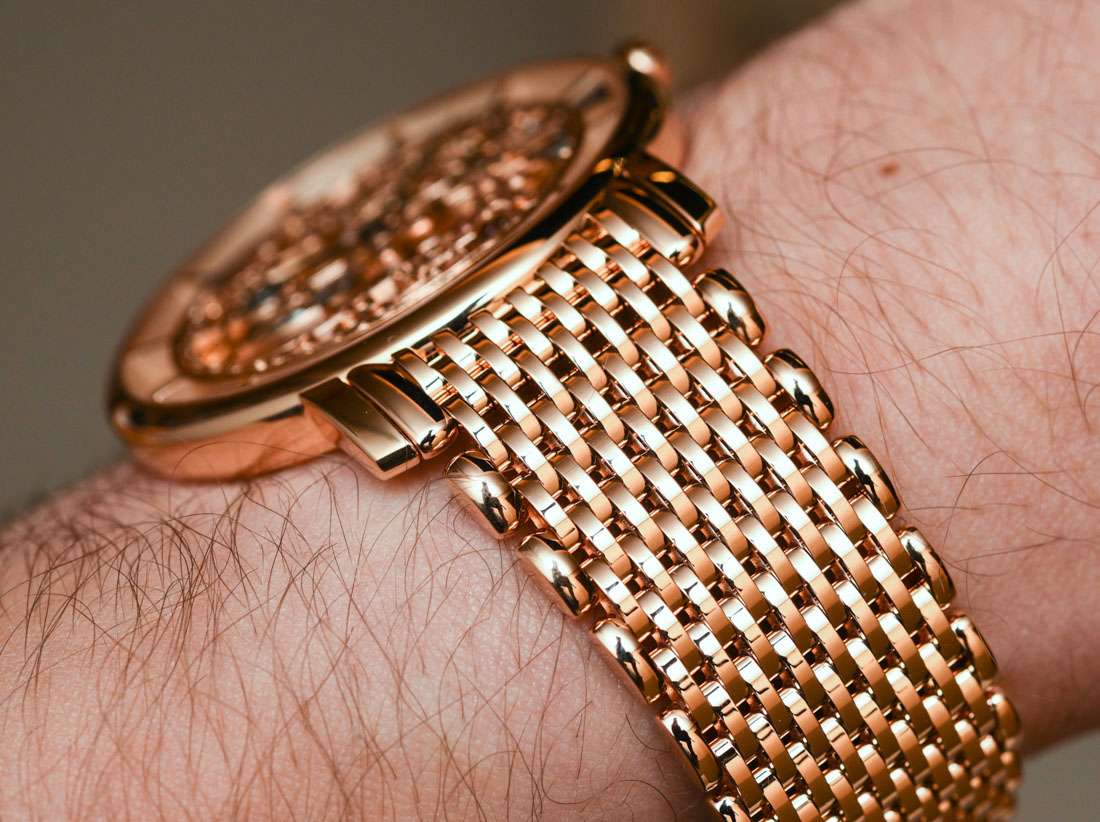 If you came here for the specs and those fawning superlatives, I won't leave you without them. The Patek Philippe Calatrava 5180/1R is one magnificently executed dress watch – especially in the sense that it could dress even the most naked of emperors. Patek Philippe calls the 2.53mm thick self-winding 240 caliber "famous" and "ultra-thin" – we are more convinced about the latter, not so much about the former. I mean, even in the nerdiest of watch get-togethers, I find it challenging to imagine people lining up en masse and shouting upon first sight: "Wow, that's the caliber 240!" 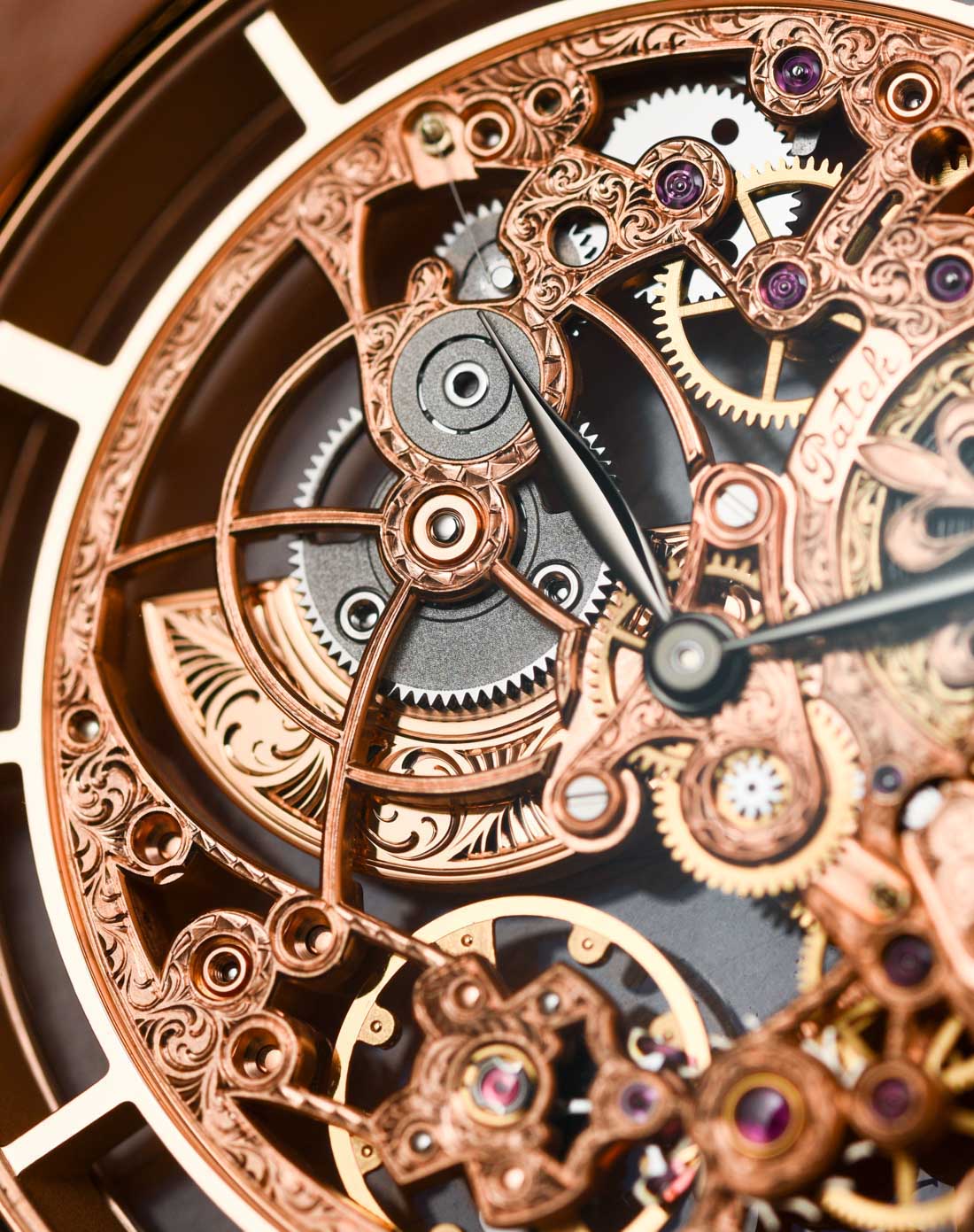 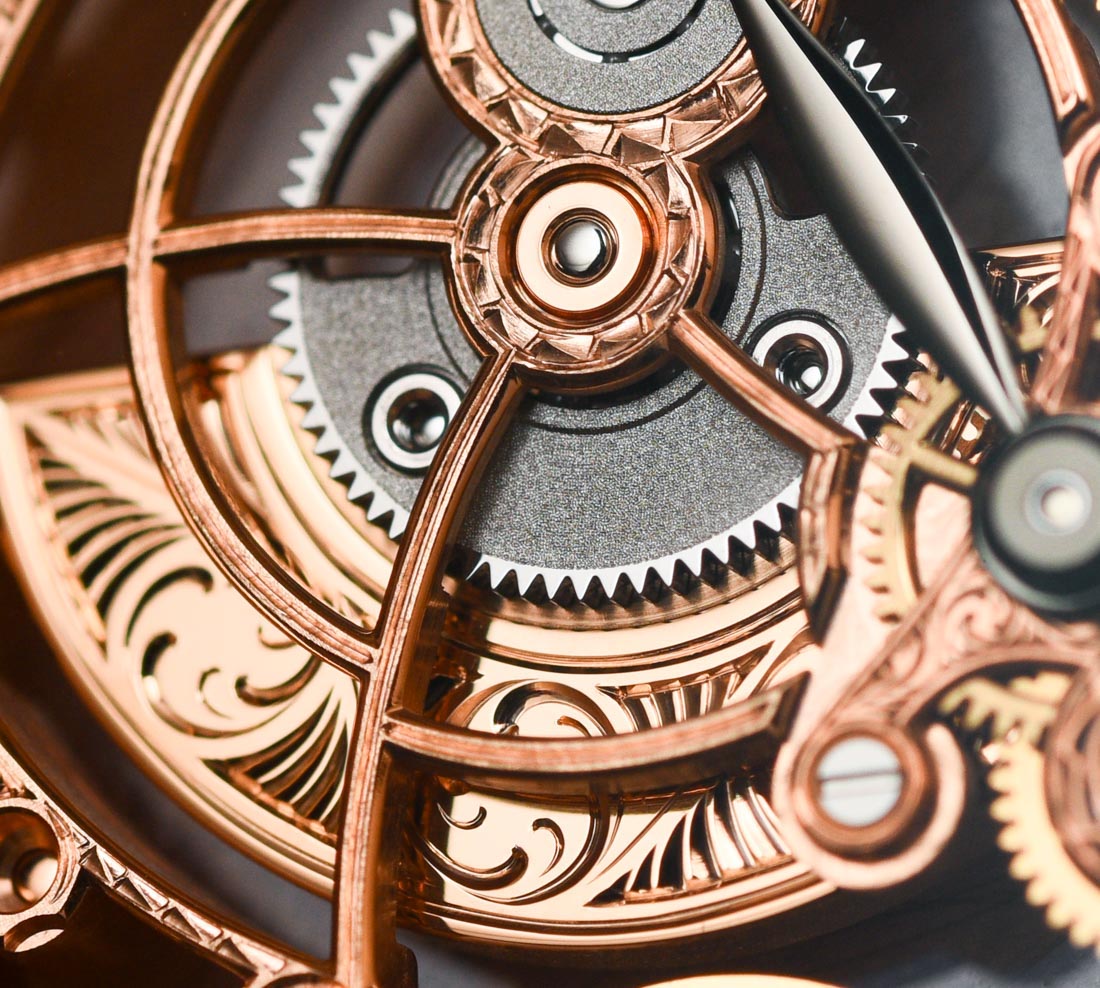 The hand-engraving is top notch quality, in line with what you'd expect from an 87,000 CHF watch. Lots of depth meet consistent intricacy: it is the sort of hand-made where it makes things uniquely beautiful, and not where it's an excuse for sub-par execution. Patek say it takes about 130 hours of work to perform the engraving work – that's over 3 weeks of work and although strictly speaking it isn't watchmaking, the engraving represents some tangible and very real added value. 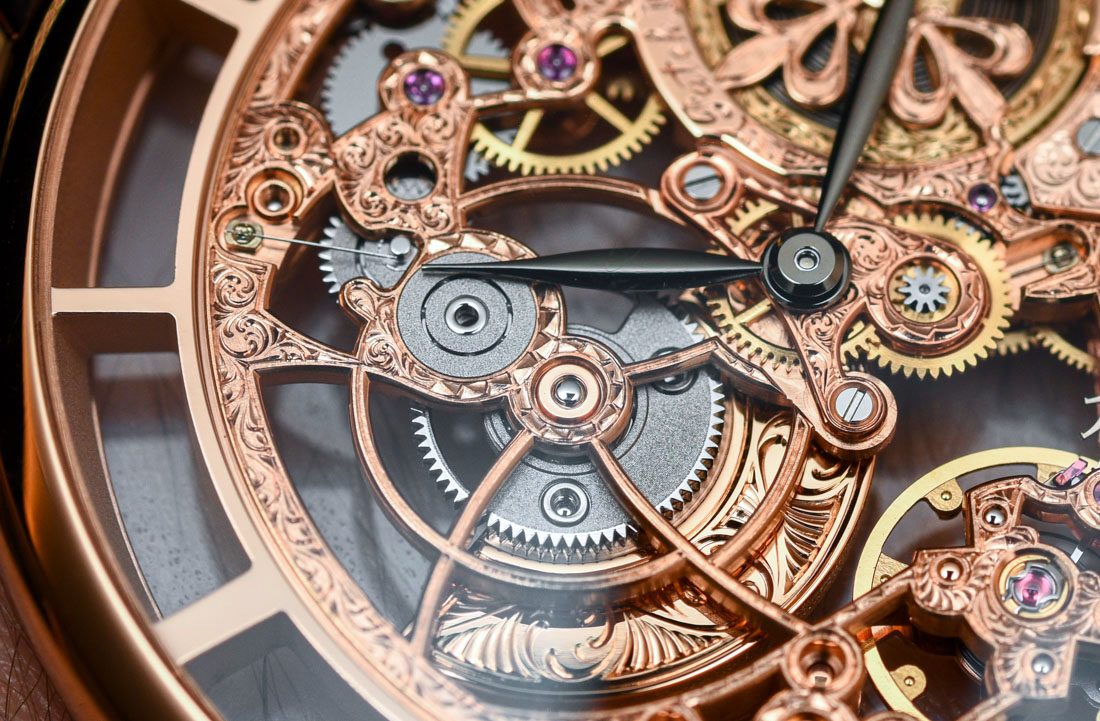 From the industry in general, I would love to see the artists themselves receive credit much more frequently and openly, perhaps by letting them sign their work in a discreet way, showcase them in corporate communications, or what have you. What I usually hear brands say when we're not allowed to photograph certain members of their staff in the manufactures is that they are afraid of competitors stealing their workforce – still, the car industry appears to have managed to figure these things out a lot better, e.g. signed AMG engines, hidden signatures here and there, and certain engineers and designers given almost celebrity status. Us watch lovers are expected to bend over backwards for the prestigious manufacture and only that, as though these precious things just fell out of the sky. 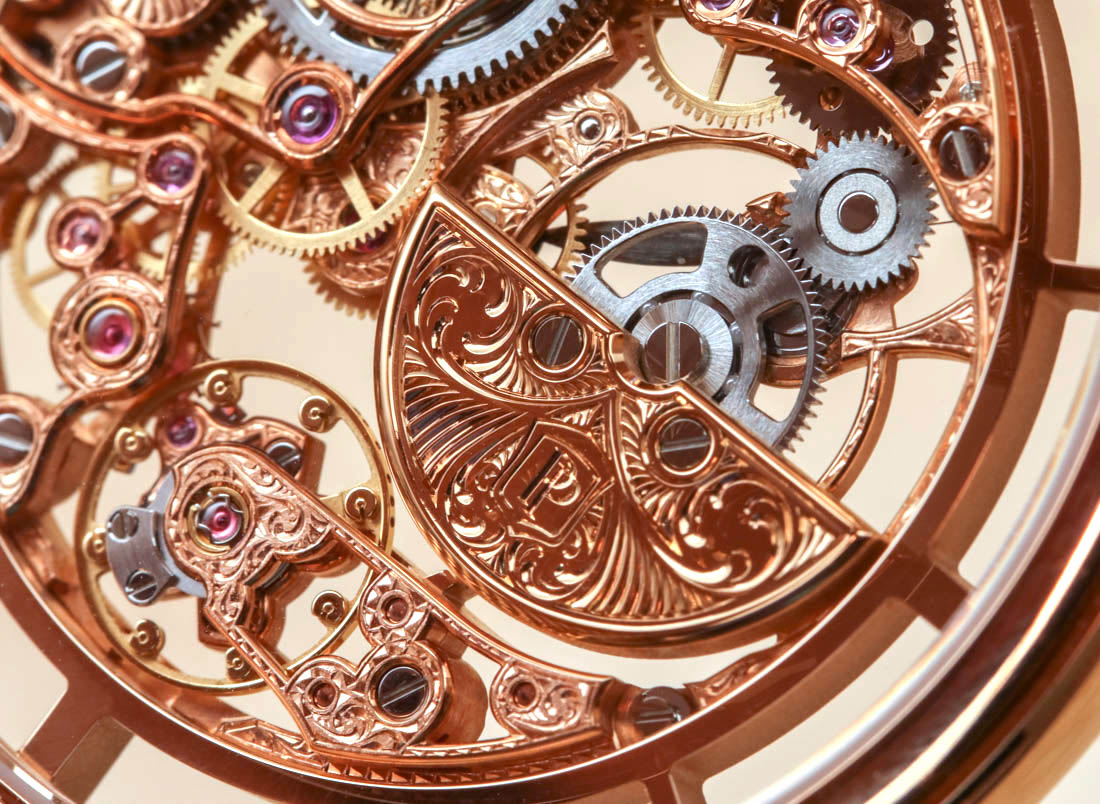 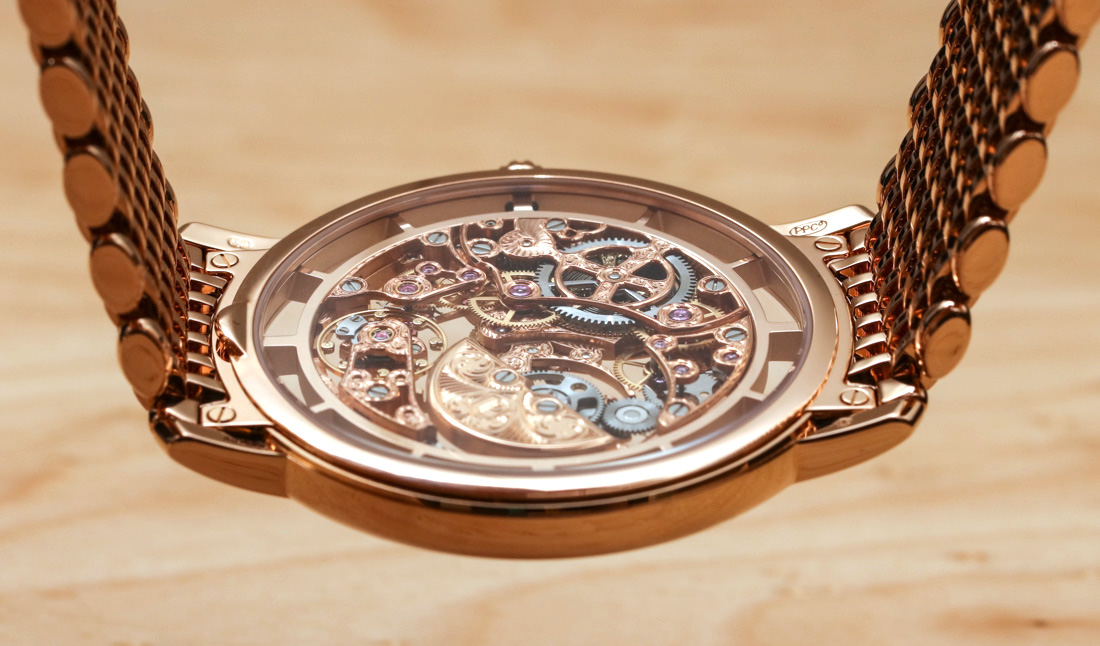 The 18k rose gold case itself is just 6.7mm thick and some 39 millimeters wide. Over the years, it has put on a few millimeters of extra girth – just like that Florida baddie – as the case is stretched out by the gold stick hour markers that push the periphery of the case further from the movement. This method is hidden 99% of the time, for all we usually see is a narrower sapphire window on the back that helps disguise the size difference between movement and case. Here, though, the age of the 40 year old movement and how the case is inflated is really on show, as the 240 was originally designed to fit in smaller watches that had been in fashion decades ago. Who knew that 39mm allowed one to wear the large watch trend? All it takes is a 40 year old movement. 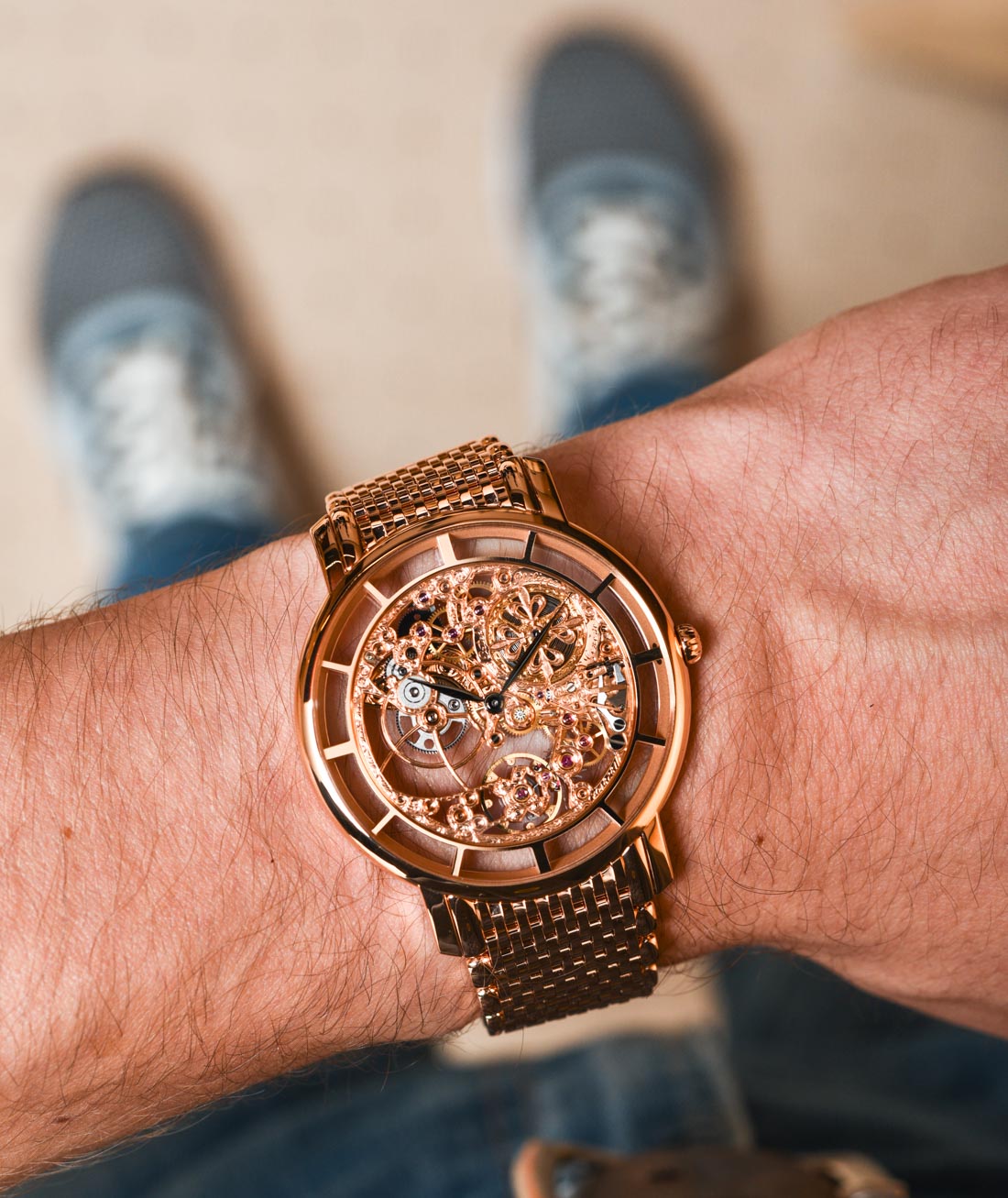 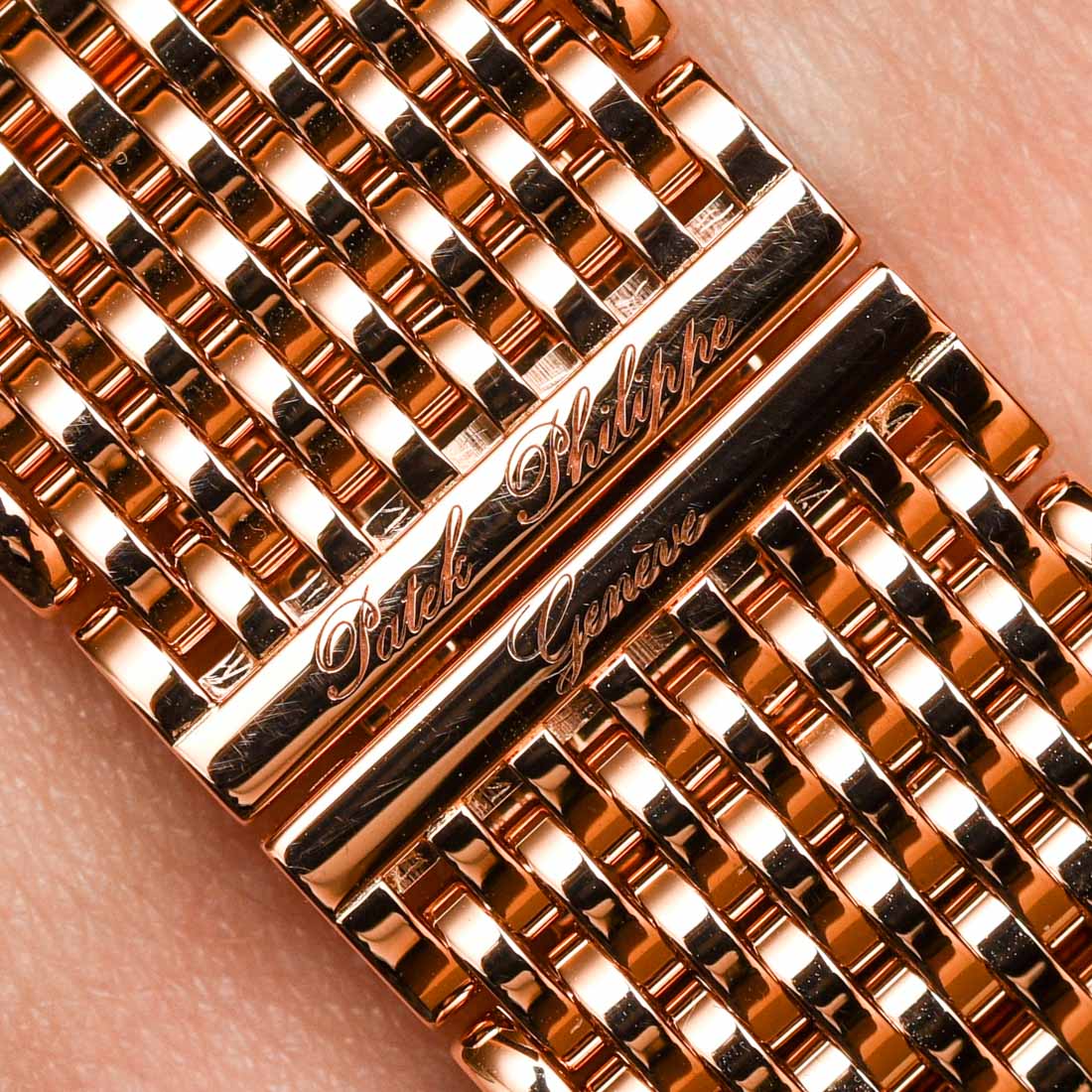 The rose gold, 15-link bracelet (I counted it!) is remarkably flexible and comfortable to wear – to look at, maybe not so much. It's an actual waterfall of gold around the wrist. This much gold for gold's sake works as an almost artistic contrast against the intricacy of the hand-engraved movement. It is brash ostentation against 130 hours of extremely focused, surgical-grade craftsmanship. Poetic, isn't it? Don't get me wrong, the bracelet itself appears so infinitely expensive its aesthetic boggles the mind, and I'll readily admit, someday I hope to be in a position where I can casually rock a full gold bracelet like this (or of some other configuration), just because.

But with Patek, I'm only slowly admitting to myself that I'm seeing a just because side of – think about the horrid 5522, the weird, boasting maths equation on the dial of the 5976/1G, or the unwearably sized, ultimate just because watch, the Grandmaster Chime. 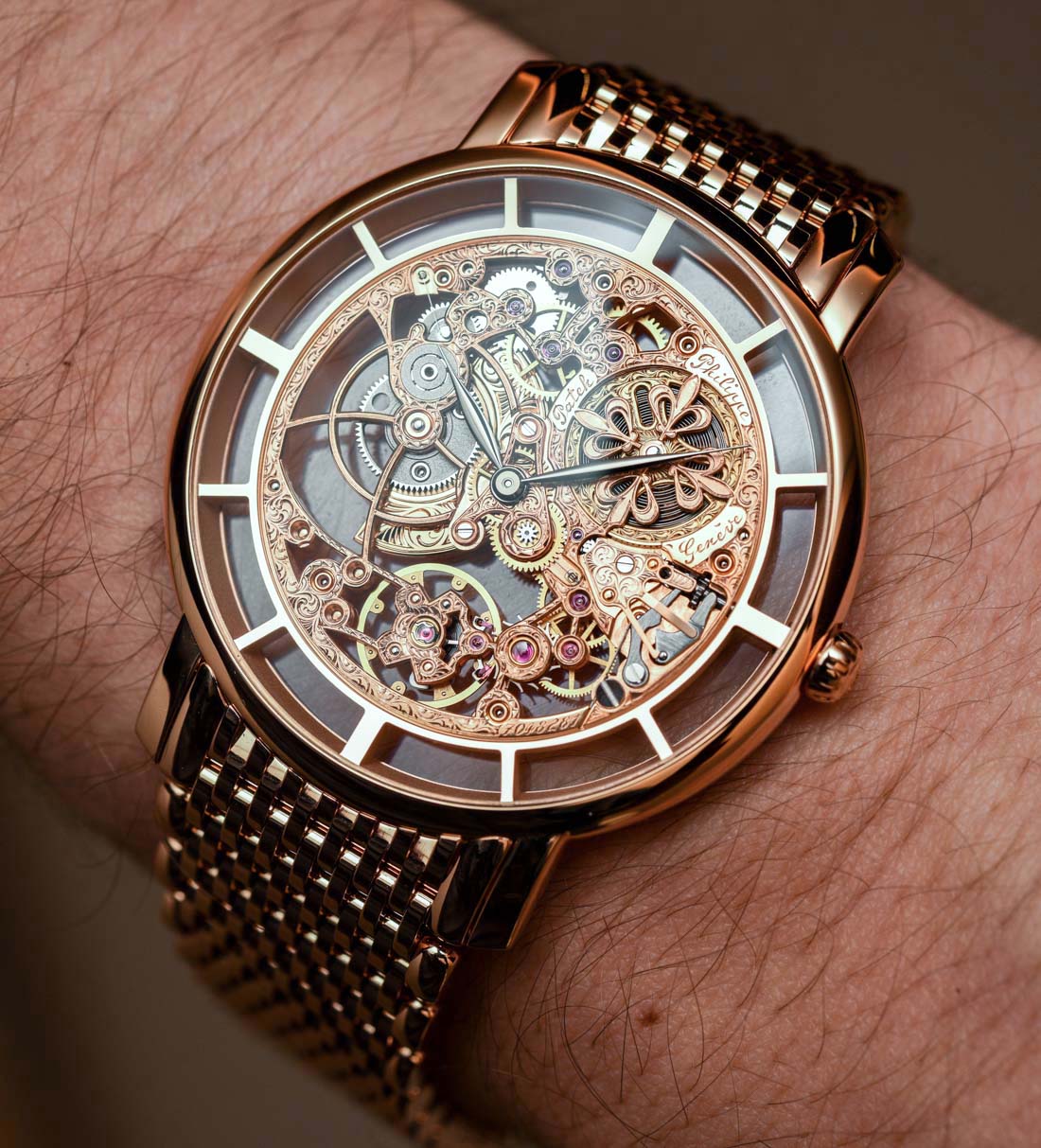 All in all, the 5180/1R is a watch I'm happy to have seen and respect all for the same reasons as I love to have seen and respect a T-Rex (in a museum). It's a king of a long gone era, dressed in all the loud and profoundly intimidating codes that evolution taught it to put on to elicit fear and humility from its peers – but those codes are irrelevant and borderline ridiculous today. Ironically, both the 5180/1R and the T-Rex today remain to be seen only as skeletons.